How To Fix PLA Getting Brittle

It’s frustrating how your attempt to print 3d prototype results in having the PLA filaments breaking off at the slightest touch. We know that PLA is widely used in 3D printing, but their tendency to go brittle has frustrated many hobbyists and professionals alike.

Various theories have explained why the PLA filament keeps breaking apart during print. Users also seek ways to overcome the brittleness of the filament. Before we explore the available options, let’s dig deeper into the potential causes of such incidences.

Why PLA Filaments Get Brittle?

Often, PLA filaments’ complaints getting brittle arise when they are left idle for a few months. But there are also instances when a spool of PLA broke quickly after being used for just a few weeks. The obvious sign of such brittleness is the PLA filament breaking into pieces with the slightest contact.

Both experts and regular users couldn’t agree on the brittleness causes, with each holding on to their respective arguments. However, chances are, there is more than one contributing cause that makes the PLA filament brittle.

For a start, PLA, which stands for poly-lactic acid, is known to be relatively brittle. The property means that it is inherently brittle to a certain extent, particularly compared to materials like ABS. PLA is also known to degenerate rather rapidly, which explains why it eventually snaps off during printing.

The degeneration process of PLA could take months, but some conditions could further aggravate the material’s flexibility. A commonly circulated theory is the moisture adsorption by the filament. When placed in a humid environment, the filament absorbs moisture from the air and alters its physical properties.

Usually, the reel’s outer part starts getting brittle as they expose to moisture. To make things worse, the attempt to straighten a rolled filament applies mechanical stress beyond the tolerance of its altered flexibility. This can explain why the filament keeps breaking off when you tried printing with it.

In some cases, color additives that add to the filament may change its mechanical properties. For example, you may have black filament snapping off quickly while transparent PLA works fine in the same environment. Occasionally, it could be the quality of the filament itself that is the culprit.

Are there any fixes when the PLA filaments have gone wrong? There is a slight chance of getting the filament into its original form by applying heat to it. The theory that supports this suggestion is that the heat would cause the moisture to evaporate, leaving the PLA in its original structure.

Here are two ways of using heat to dry the PLA filament. 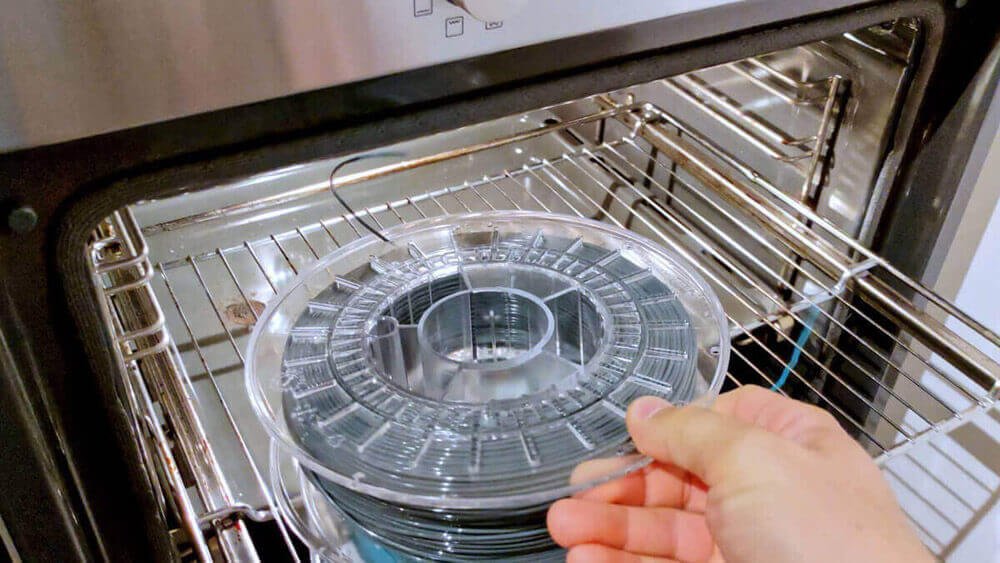 In some instances, heating the entire filament roll may reverse its brittleness. This is assuming that the changes in its physical properties are still reversible.

Place it in an oven for 2 hours and check out if the flexibility has returned. You’ll want to ensure that the temperature does not exceed 50°C when you’re heating the entire roll of filament. You mustn’t exceed the suggested heating temperature as the whole reel may turn soft and rubbery.

Repeat the process if you feel that the brittleness has decreased but yet to reach the ideal level. After heating the roll of filament, you could check if it’s still brittle by bending the filament and see if it breaks off.

If these attempts failed, you could try cutting 2-3 meters of the filament off the roll. In most cases, only a short length of the filament is affected while the remaining is in its original condition.

If you’re having issues with brittle 3D prints, you could increase the temperature of the nozzle. This action ensures that sufficient heat is applied to evaporate the moisture and soften the PLA filament’s physical form. You’ll want to try a few different temperatures to get the outstanding value that works.

However, You should note that these methods may not be effective if the physical properties of the PLA are altered permanently. If the PLA material has gone through irreversible molecular changes, no amount of heat will fix its brittleness.

You’ll have to replace the brittle PLA filament with a new one if the above suggestions don’t solve the issue.

When dealing with brittle PLA filaments, prevention is always better than cure. If you’re having regular issues with PLA filaments snapping into pieces, you’ll want to stop leaving the filament on the 3D printer after usage. Instead, ensure that the filament retracts into the reel after printing and is stored in a sealed pouch or container. If possible, place desiccant in the storage to ensure that excessive moisture is removed. This prevents moisture adsorption from weakening the structure of the filament.

Besides that, you could also cover the reel of PLA filament that you’re currently using with a plastic bag and puncture a hole for the filament to be fed to the 3D printer. This method minimizes the chance of moisture being absorbed into the material.

As mentioned, the physical properties of PLA alter by temperature, moisture, and additives. You’ll want to be diligent when ordering supplies of PLA filaments because improper handling may result in brittleness of the material. Try bending a new roll of PLA filament to ensure that it’s in proper condition.

There’s no quick fix to brittle PLA filament. Heating and drying may not always be successful. It is better to have a habit of storing unused PLA rolls in a dry environment and ensure that you’re getting the material from a reputable supplier.