Up Milling vs Down Milling

Want to know a secret? Every fourth confuse left and right. Our experience shows that differentiating up from down milling is even a more complicated nuance.

We visualized these two CNC milling processes in this post so you will never confuse them again. But in case you just lack extra information about technical differences between up and down milling, we have got you covered as well.

What is Up Milling?

To begin with, let’s recall general information about milling. It is a widespread machining process that involves the use of rotating cutting tools. Such tooling is intended to interact with a workpiece and shape by cutting off small pieces (ships) of metal from its surfaces. A clamping device holds a workpiece, and the material is removed by flutes (sharp cutting edges) of tooling. Nowadays, milling and other manufacturing procedures are mostly performed by computer numerical controlled (CNC) machines. Sounds easy, isn’t it? So, let’s get down to business. Up milling is the first method of arranging a cutting tool, or cutter, and the direction of a workpiece movement. You may have heard of up milling as conventional or climb up milling. It is so because a cutter moves against a workpiece being fed directly on it, as a cutting tool is climbing on a mountain. You can see examples of both up and down milling in the infographics below. 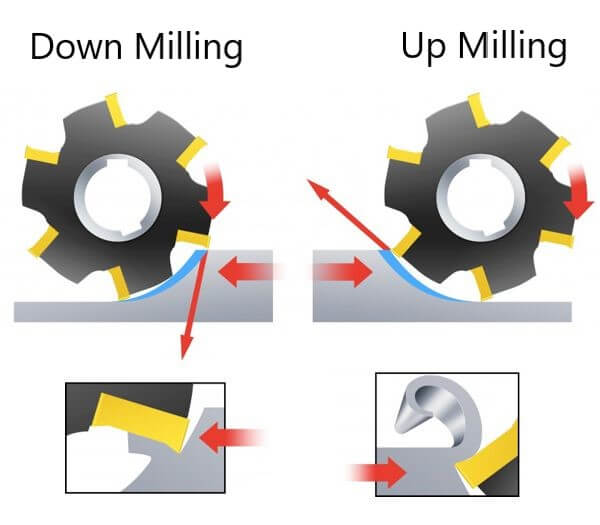 As you can see, the directions of a cutter’s rotating and a workpiece’s feeding are opposite. Consider that up milling conceives high amounts of heat because of friction. Additionally, during up milling, the width of metal chips gradually increases from the thinnest sizes possible to rougher ones. And it is decreased again, if needed, by the end of the process.

What is Down Milling?

Down milling is the second and last method of arranging both a cutter and a workpiece. In this case, rotation of tolling is the same as the direction of a raw component’s feeding.

You may have heard of milling as of climb-down milling. If you take a look at the infographics above, you can see that the direction of a cutter’s movement is like a man climbing down a mountain.

There is a golden rule of milling. It is thick to thin. In other words, starting from rough cuts and large chips being removed, the process ends with precise cuts and thin chips. While up milling hardly enables manufacturers to follow the rule, down milling responds to it perfectly.

What is also great about down milling is that it causes less friction. As a result, there is no extra tension and no large amounts of heat that may partially deteriorate surfaces of some metals with low melting points.

Differences Between Up and Down Milling

The described types of milling have substantial differences that make manufacturers pick a process for a particular component.

It is already stated that up milling is rather hard and rough machining. Thus, it is typically required for milling, casting, and forging.  Some extra tough materials such as titanium, bronze, or stainless steel are machined by up milling because such processes enable them to apply more force to a component. And, there is no risk of surface deterioration because of melting of excessive physical force. In contrast, down milling is a thinner and even soft process. It is generally used for finishing operations, as it offers greater smoothness than up milling does.  Sawing, grooving, slotting, keyway cutting, and other similar operations are also included in the scope of applications of down milling. Most frequently, materials such as aluminum, with a low melting point and low hardness, are to be machined with the use of up milling. 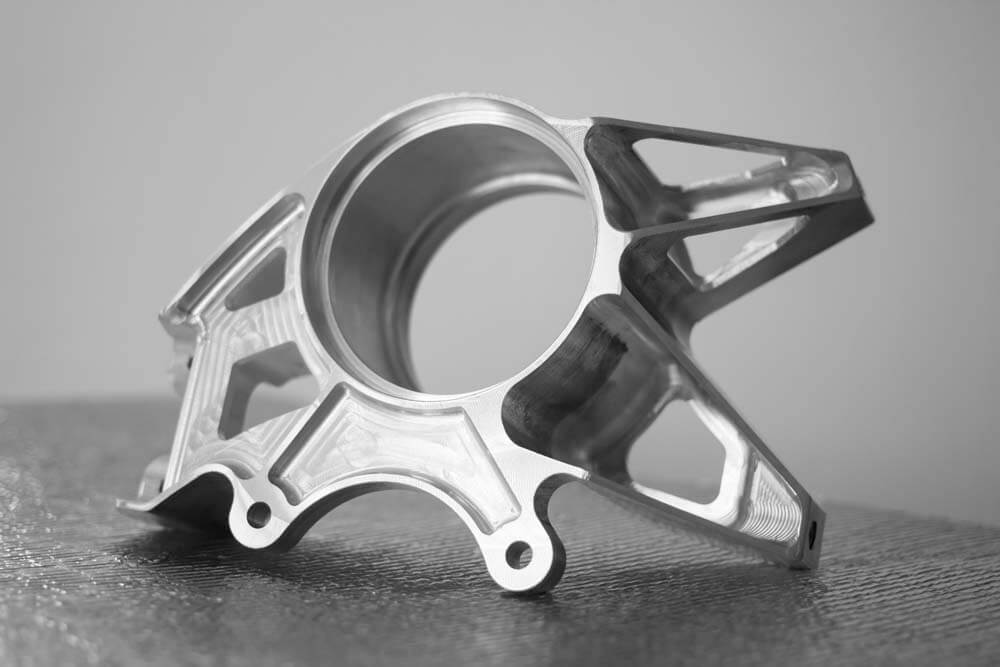 Generally, under certain circumstances and with proper settings adjustment, both types of processes can offer great surface smoothness. However, up milling is not fully designed for great finishes, as just opposite directions of movement of a workpiece and a rotating tool make it almost impossible to cut off the thinnest pieces. In contrast, down milling is intended to apply lower forces, cut thinner metal chips, and work with metal that is often required to be polished to perfection. As a result, the surface quality of a component manufactured with the use of down milling will always be on a completely another level than such with up milling.

We hope that you are not confused with us showcasing infographics with pointing out the direction of a workpiece feeding.  In a broad sense, milling is shaping a stationary workpiece with a movable cutting tool. While moving a workpiece into a stationary cutter is called turning. Up and down milling may imply that a cutter rotates and is fed simultaneously in the same direction or in the opposite. It is still these two milling processes, but with a stationary workpiece. Technically, the movement of a worktable is not crucial. You may find similar methods as described in other manufacturing operations. Just stick to rotating along the feed direction, or in the opposite direction. In essence, with proper settings, moving a worktable and a cutting tool, or one of them only does not impact the quality of milling. But, it is definitely easier to program the movement of only one of the constituents of the process.

This one is simple. Up milling requires high forces to be applied to a workpiece. Apparently, it increases the tension that a cutter experiences. Additionally, friction conceives extra heat, which also deteriorates tooling. As a result, even expensive cutters may have their sharpness reduced or even break shortly. In contrast, down milling is a more gentle process, typically applied under low tension and low friction to soft metals such as aluminum and its alloys. Even relatively cheap tooling may last for a longer period if used in down milling, compared to up milling.

Basically, power is the last concern of factories’ owners. However, in case you are curious, we may reveal this secret to you based on our experience. Power consumption during up milling slightly exceeds down milling consumption. It is explained with the rubbing action of more friction, which requires more energy. The difference is not worth paying attention to, but it is still present.

To sum up, up milling is great, and potentially, the only choice for machining tough metals. This method is also more suitable for rough cuts due to the opposite character of a workpiece and a cutter’s movements. In case you require great finishing, need to cut soft metals like aluminum alloys, or just thrifty, down milling will suit you much better.