In 3D printing, good output quality starts with good raw material. Even the perfect 3d printer settings will not yield an excellent finished product if you’re working with PLA filament that has been compromised by excess moisture.

Why is moisture such a big problem anyway, and how can you keep it at bay? Check out our guide on the proper handling and storage of Pla. 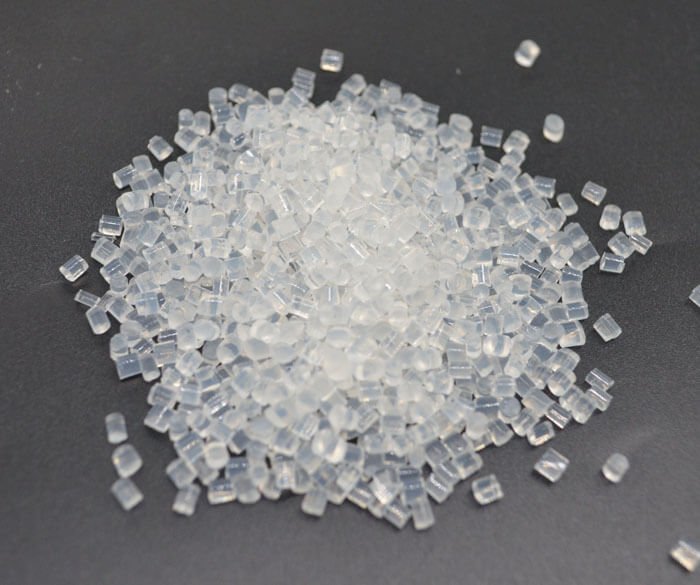 Yes, Pla is a hygroscopic material. In simple terms, this means that Pla absorbs moisture from the air readily. Unfortunately, all the 3d filament is almost the same.

This peculiar behavior comes from the fact that the chemical structure of Pla is full of unsaturated bonds, mostly of the double-bond variety. This can also be observed in other thermoplastic polymers used in 3d printing. When the filament is exposed to the atmosphere, these double bonds tend to attach to water molecules via hydrogen bonding.

Knowing that water is attached to Pla at the molecular level should give us an idea of how difficult it is to remove. This isn’t just water that you can wipe off. Removing water from Pla will require breaking the bonds that attach to them, either via heating or by drawing them into another substance. A more proactive measure would be to prevent Pla from being exposed to excess moisture in the first place.

Compared to other filaments like Abs and Nylon, Pla is much less prone to moisture absorption. However, we cannot ignore this problem.

How long does it take for PLA to absorb water

Based on experiments, PLA filament that has been saturated with moisture will be about 6% heavier. Left in the open, any spool of PLA filament will eventually reach this level of saturation. How long it takes to get there will mostly depend on the humidity of the environment. Moisture absorption is faster when it’s humid and vice-versa.

There are also other factors to consider, like light, temperature, and the Pla brand. Thus, there is no prescribed period when an exposed Pla starts to deteriorate due to moisture absorption. Exposing Pla to a humid environment for upwards of 30 days should be enough to reach the point of moisture saturation.

To answer this question indirectly, we can use Nylon and polycarbonate as benchmarks. These materials are much more hygroscopic than PLA. When they are exposed to the atmosphere for 48 hours, they absorb enough moisture to affect their printing performance.

Knowing this, we should presume that PLA has a tolerance for moisture beyond 48 hours. However, we would recommend 48 hours as a soft limit for exposure if you still want to print reliably with your PLA filament. Some remedial measures may be necessary for a spool of PLA filament exposed to a humid environment for more than 48 hours.

How can You Tell If PLA Filament Is Bad 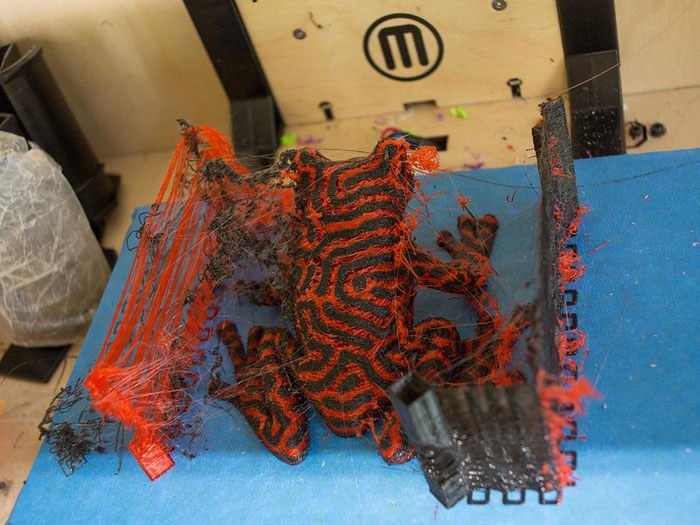 Before we even go into the details, we’re telling you right now that PLA with enough moisture will almost certainly lead to 3D printing problems. For this reason, it would be best to check for signs of water before 3d printing.

Unfortunately, telling when PLA has gone wrong because of moisture may not be evident with just a brief look. Here are some telltale signs to watch out for if you suspect that your PLA filament already has too much moisture:

1. PLA filament swells when it absorbs moisture. This isn’t immediately apparent, as the swelling is typically in the magnitude of several micrometers. However, You can check if you have a caliper on hand to measure the filament diameter.

2. PLA filament becomes brittle when exposed to moisture for too long. This is a consequence of the polymer chains breaking, with the open ends being substituted by water molecules. Unfortunately, this kind of damage is irreversible. If your PLA filament reaches this point, you’re better off recycling it.

3. 3d printing with a moisture-logged PLA filament will result in popping or hissing sounds in the extruder. This is a result of the moisture in the filament heating up, expanding, and eventually vaporizing. You will likely also see wisps of steam coming out of the extruder’s melt zone.

4. Uneven extrusion is a hallmark of printing with PLA filament that has been compromised by moisture. This can be present in several ways. Stringing or blobs is relatively standard as the expansion of water exerts additional pressure on the filament. You may also notice several gaps or holes in the layers as they are extruded.

It is generally considered bad practice to 3d print with a filament if you’re not certain that it’s scorched. This goes for any material, including PLA. Ensuring that your PLA filament is stored correctly or dried before use is well worth the extra effort.

How Do You Keep PLA Filament Dry

Now that we know how much of a headache it can be to print with PLA filament that is not dry, the next question is – how can you keep it dry?

You can approach this problem via proper storage or by drying the filament before 3D printing. There are advantages to each approach, although doing them both is also another option. 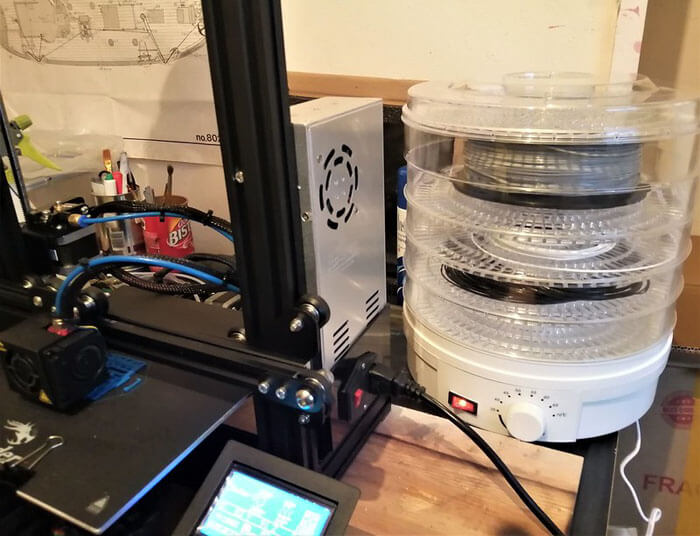 A dry box works just like a food dehumidifier. You can set it at a specific temperature (typically 50 °C), at which it will continuously rotate air in to remove excess moisture. Keeping the dry box running for five to six hours is usually enough to dry it for 3D printing. Dry boxes also have holes through which the filament can pass through, allowing it to act as a spool holder during 3D printing. This prevents moisture pickup while 3D printing is ongoing.

While there is no question that dry boxes are exceptionally effective in drying 3D printing filaments, they are also much more expensive compared to the alternatives. Because of this, having multiple dry boxes isn’t common in the 3d printing community.

The cheapest way to store your PLA filament in a manner that prevents moisture pickup is to keep them in the standard zip-sealed bags. These are the same ones typically used in households to store food. Just make sure to get extra-large zip-sealed bags so they can fit your entire filament spool.

When you store PLA filament in a zip-sealed, try and get as much air out of it before it seals. Since it’s impossible to get a complete vacuum with this method, you will still need to throw in a reasonable amount of desiccant (typically silica gel) in every bag. This desiccant will absorb any residual moisture in the filament and the trapped air.

Zip-sealed bags are the most practical option for filament storage. However, they have one major flaw – air can still diffuse through plastic, albeit very slowly. This means that you cannot just store your filament inside zip-sealed bags and forget about them indefinitely.

A good practice would be to label your zip-sealed bags with the date they were sealed and check on them after two to three months. You will likely need to swap out the desiccant inside the bag for a fresh batch. 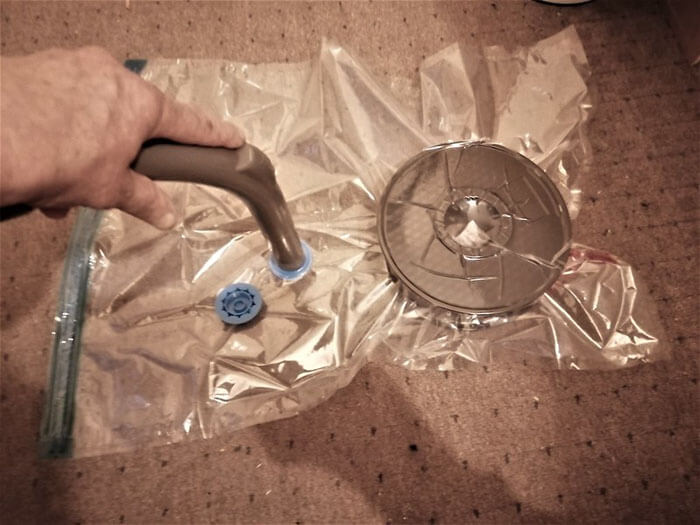 Vacuum bags are a lot like zip-sealed bags, only with an extra significant benefit. Instead of pressuring out any excess air, a vacuum bag has a provision for sucking out the air out of the bag. This is through a one-way vent somewhere on the surface of the plastic. You can even go the extra mile and suck the air out of the bag using a vacuum machine.

The advantage of using a vacuum bag is that it keeps your PLA filament dry for a more extended period. It will help if you still had some desiccant inside the vacuum bag if there is any residual moisture on the filament itself.

As with zip-sealed bags, a vacuum bag made of plastic will still allow some air via diffusion. It will be effortless to notice this as the interior of the bag loses its negative pressure. When this happens, replace the desiccant with a fresh batch and apply vacuum anew to the bag.

Even if you don’t have a dry box, there’s another method to dry your filament before 3D printing – drying it inside an oven. We recommend using an electric oven for this purpose, simply because it provides more even heating and better temperature control.

To dry your filament in an oven, pre-heat the oven to a temperature between 40 to 50 °C. Make sure to get a stable temperature reading first to avoid problems when the range overshoots the target value. This is well below the temperature at which PLA melts, but we recommend taking this process slowly so that you don’t end up with a ruined filament.

Drying an entire filament spool at these temperatures will take anywhere between four to six hours. Make sure to check the temperature of your oven periodically. As you should know by now, it does not take much to melt PLA.

If you use silica gel as a desiccant for your stored filaments, you can use your oven for another purpose. By placing the silica gel inside an oven set at 120 °C for one to two hours, you can recharge silica gel that saturates with moisture.

It is ensuring that you always have a fresh batch of silica gel to use. Silica gel also has many practical uses around the house, such as absorbing the odor from your gym shoes or defogging your car’s windshield.

Among the issues you could encounter with PLA 3d printing, moisture is one of the most insidious. You barely notice it, but it can creep up on you slowly and unnoticeably. If you don’t address the moisture problem, you will almost certainly end up with 3d printing issues.

Dealing with moisture can take quite a bit of work. However, avoiding all the potential problems is worth the effort.